Julian Assange: "Life here is like on a space ship"

As history shows, most of the genius people faced unbearable obstacles during their lifetime. The same thing happened to one of the world`s most famous and, at the same time, wanted, journalist and programmer – Julian Assange. It was his third anniversary in the Embassy of Ecuador in London, where he is dwelling in small room without windows. Instead of a normal bed there lies a mattress on the floor. Instead of furniture – a small round table, which he uses for work, and a couple of shelves on the walls, with different medicaments on them. Julian is trying to follow healthy lifestyle under the guidance of his personal trainer. He consumes vitamin D in large doses and uses an UV-lamp not to be so pale due to the lack of solar radiation.

“It feels a bit like living in a cosmic station”,-
told Assange to the Daily Mail journalist while showing his apartment.

One may say that Julian Assange has never had a home. When he was one year old his mother married a manager of a wandering theatre and since then the family was on the tramp all the time. Eight years later his mother got a divorce and started dating a musician. Soon they had a baby and only then she found out that her new husband was a member of the sect called “Family” where they took the newly born children away from their mothers. Julian, together with his mom and half-brother, was forced to hide from his stepfather. By the time he turned sixteen, his family changed 37 places of living and Julian changed 37 different schools, though he himself preferred home education. Assange never graduated from a university, though had studied at 6 different universities in Australia. Later in one of the interviews he said that he disliked that the students of programming were forced to work on projects, which were later used for military purposes.

“Do not destroy the system you hack, do not change the information
it consists, but share it”

Such was the main principle of the group of hackers named “Worms Against Nuclear Killers”, founded by Julian and his friends when he was sixteen. This gave a start to his further career. The group became well known in October 1989, when right before the landing of the cosmic shuttle “Atlantis” their abbreviation WANK appeared on the screens of the NASA computers. In the same year the Australian Federal Police set up a task force “Weather” to pursue world`s first computer hackers. By that time, using the nickname Mendax, Julian Assange had already hacked the American Military Network and the Pentagon.

When in 1991 together with his friends Assange hacked the system of the telco Nortel, the police managed to catch them. In this period Assange`s young wife couldn’t stand the pressure and left him, taking their two-year old son with her. In 1994 the court decided that the damage Assange caused to the company was insignificant. He was released but had to pay a fine. After this incident, Julian had changed a couple of professions, all dealing with information technologies, developed a couple of programs for web security and routing and had even worked as a consultant on computer security.

“The truth does good”

In 2006 Julian Assange creates Wikileaks – world`s first platform for whistleblowers, where they could download secret information without disclosing their personalities. It has become the most scandalous resource of the classified documentation. Many secrets on the Afghan were revealed. For instance, in 2010 there appeared a video, on which an American military helicopter attacked Baghdad causing hundreds of deaths among civilians. The video was leaked by an American soldier Bradley Manning, who was later given away by an ex-hacker Adrian Lamo, who is now working as a full-time whistleblower for the FBI. Manning was arrested and sentenced to 35 years of imprisonment for leaking hundreds of thousands classified documents to Wikileaks. In July Wikileaks published new military classified documents, disclosing the details of the victims among civilians and the possible connections between Pakistan and Taliban.

On December 7, 2010, Julian Assange lost his freedom. The judge didn`t bring any charge against him, as he couldn’t decide whether to charge him or to try.

On the following infographic, you can see the whole timeline of the Assange`s case: 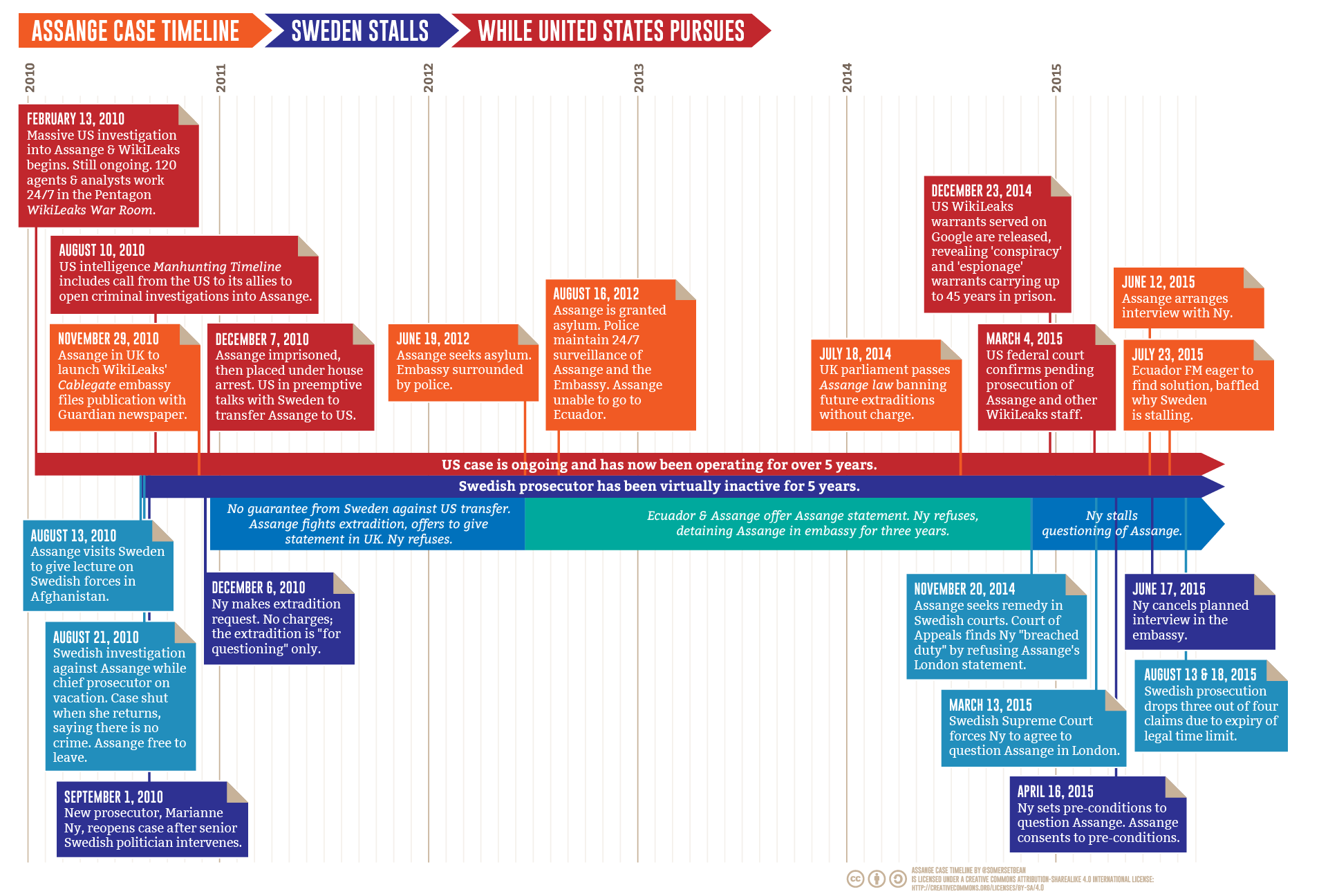 The US opened the investigation on Wikileaks in February 2010, drawing in more than a dozen of governmental organizations such as FBI, DOJ ( which is currently working on the case), NSA, CIA etc.

After Wikileaks published “The War Diary: Afghanistan War Logs”, the US government assumed that more classified documents would be released soon and urged the other countries to start investigations against Assange in order to limit his freedom of movement.

Assange had been trying to testify many times during these five years. After he was arrested in Sweden in 2010, the judge gave permit for him to leave the country but never asked Julian to testify. On 20 November, 2010, Sweden applied to Interpol to put Assange`s name under the Red Notice, which was later placed on the main page of the Interpol`s website. A month later the UK receives from Sweden the European Arrest Warrant on Assange. Since that time Julian Assange is wanted internationally and cannot leave the Ecuadorian embassy.

In 2011 Assange appealed to the UK Court of Appeal and to the Supreme Court with the request to testify in his own case, but both courts dismissed his appeals. Then Assange asked for the political asylum in the Embassy of Ecuador, being afraid that there was a threat of extradition from England or Sweden to the USA.

In his interview for The Guardian, Assange also says that he is disappointed not to give his side of the story. His lawyer, Carey Shankman, stated that Marianne Ny, the Swedish prosecutor, deprived Assange of the right to justify himself from the false allegations and did irretrievable damage to Julian`s health, family and reputation.

For more than three years Julian Assange had been self-imprisoned in the Embassy of Ecuador, not going out to the streets. Though he never complained: “I have everything under control here in this small environment, and it lets me do the most important – to protect my activity from the attacks from the outside”. He is usually working 17 hours a day. Sleeping can be quite difficult because of the policemen, who are watching the embassy all the time, waiting for Julian to come out. Then they would immediately arrest him.

It is currently not know what will happen to Julian Assange in the future. There is little doubt that the closest ally of the US, Britain, will not extradite Assange to America, when the opportunity presents itself.  And there, in the US, nothing good is waiting for Julian Assange.

It is very important where you run away

Interview with Ales Mikhalevich for Meduza.

How to measure persecution?

that can be difficult to produce.

Our Collegium was registered in 2014 in accordance with the legislation of the European Union and has branches in Prague, Berlin, Warsaw, New York and Tallinn. Our leading partner is a well-known lawyer, Alaksiej Michalevic, Doctor of Science, member of the European Association of Lawyers.

Contact us, and we will find the best solution for you.

By visiting this site, you authorize us to collect cookies